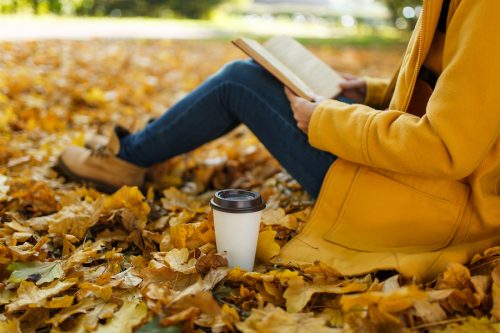 I refuse to believe we’re on Part Two on Whatcha Reading this month! HOW? WHEN? WHY?!

Either way, here is what we’ve been reading in preparation for December!

Catherine: I just finished The Secret Chapter by Genevieve Cogman. ( A | BN | K | G | AB ) This is the most recent novel in her Invisible Library series, and it’s fantastic – a funny, clever heist story, full of twists and turns and dragon politics. Highly recommended (but you should probably start with the first book in the series).

Right before that, I read and loved Talia Hibbert’s novel, A Girl Like Her ( A ), which is sweet and moving and funny and occasionally enraging (for the right reasons), and also Can’t Escape Love by Alyssa Cole ( A | BN | K | G | AB ), which has escape rooms and unashamed geekiness and a great, snarky, disabled heroine, and which I absolutely adored, so I’m having a really good week, reading-wise.

Sneezy: My ADHD brain has me scampering everywhere like a squirrel right now, so I’m bouncing between several books. It’s mostly an even split between The Right Swipe by Alisha Rai (FIIIIINALLYYYYYY, THE HOLD LINE WAS SO LOOOOONG), A Convenient Marriage by Jeevani Charika ( A ), and All Blood Runs Red by Phil Keith and Tom Clavin. When I first read the synopsis of All Blood Runs Red, I thought Eugene Bullard, who the biography is about, sounded like he could be the basis of one or three of Beverly Jenkin’s heros. So far nothing in the book has dissuaded me from this feeling, even though romance didn’t really work out for him. There are some dudisms in the biography that makes me grumble, because I feel like there are some information about the world wars or the people involved in them that didn’t need to be there. Sometimes they give great context, and loops immediately back to how these things or people matter to Bullard, sometimes it’s just a geek out.

And look, I’m all for a geek out, BUT WHAT’S HAPPENING WITH MY BOY, WTF DON’T LEAVE ME HANGING. And yes, all the bits I felt like were extraneous felt SO DRY. But MAYBE these people turn out to Bullard’s friends or which ever battle they’re waxing poetry about DOES affect Bullard, so I can’t just SKIP. ARGH

Anyway, the title of the biography is actually lifted from Bullard’s AUTObiography that was never published. While the authors did apparently do a lot of leg work trying verify Bullard’s account of his life, I still wish they didn’t take his title, and Bullard’s autobiography could be published, warts and all. Tara: I, too, am bouncing between a bunch of books. And yet, even though they’re all great, I’m not reading any of them right now because I’ve fallen into a rabbit hole of Rory/Paris Gilmore Girls fanfic, despite that not being one of my usual fandoms. I’ll probably climb out of it by tomorrow and will pick back up with Alone by E.J. Noyes. It’s a first person story about a woman who’s in a research study for life off Earth, which means she’s being paid a buttload of money to live in total isolation for 3+ years. At some point, someone will stumble on the property where she’s at, but that hasn’t happened yet, and I’m very curious to see how that relationship goes because I think this is supposed to be a romance.

Shana: I’m currently reading Not Since You by Fiona Riley, ( A | BN | K | AB ) a low-angst second chance f/f between a cruise ship bartender and her first love, a graphic designer who just happens to be a guest on the ship. However, the pace makes Mary Balogh’s books look frenetic—and I love Balogh, to be clear. I’ve started looking longingly at my recently arrived preorder of A Second Chance Road Trip for Christmas by Jackie Lau. ( A | BN | K | AB ) It’s a novella, so it probably doesn’t count as cheating if I just pop over and read it quickly.

Lara: I have just finished Would Like to Meet by Rachel Winters and it makes me feel the same feelings I did after watching One Fine Day and Two Weeks Notice. Good Book Noise! Kiki: I am ALSO bouncing around a lot of stuff and it’s all been really excellent!

I’m listening to Jenny Odell’s How to Do Nothing: Resisting the Attention Economy ( A | BN | K | AB ) which is this wonderfully expansive critique of capitalist and technology-determined definitions of productivity and how it consumes our time, bodies, and environments. And the effects of refocusing our attention. Like I said, I’m listening to it right now, but I’m planning on buying the physical book so that I can mark it up with notes because besides being really affirming and grounding, the writing is gorgeous. I’m also really interested in any discussion of privilege—it’s been mentioned briefly although I’m still early enough in the book that it may come back.

I’m reading/listening to approximately three other things but I think it’s most pertinent to the folks here that I listened to my first Ilona Andrews last week and was DELIGHTED by how much I liked it! So now I’m just starting White Hot. ( A | BN | K | AB )

Aarya: *emerges from reading cave, certain that someone has just mentioned Ilona Andrews somewhere in the world*

In reading news, I just finished Erin A. Craig’s House of Salt and Sorrows ( A | BN | K | G | AB ) and hated it. Uneven pacing, unmemorable MCs, unexplained worldbuilding aspects, undeveloped/bewildering romantic relationship, and too much horror for my liking. I’m really sad because the writing was lovely and the premise had so much potential. But those things aren’t enough for me to like a book. I’m still debating what’s next but I think I’m going to choose Joanna Shupe’s The Prince of Broadway. ( A | BN | K | G | AB ) I really enjoy her Gilded Age books and this one features a casino/gambling den (a setting that I can never resist. Ahem, Devil in Winter). Plus, the heroine is determined to open a women-only casino. I’m excited to watch her succeed.

Elyse: I just finished Trace of Evil by Alice Blanchard. It’s a really phenomenal mystery and the first book in a new series. It’s a police procedural but takes place in a town with a similar history as Salem so there’s a theme of witchcraft throughout. Highly recommend

Claudia: I did a re-read of one of the favorite holiday books: A Christmas Promise by Mary Balogh. ( A | BN | K | G | AB ) It didn’t disappoint. I think it’s one of the few seasonal stories that the holiday is an essential/central part of the plot rather than background. You somewhat need your 1990s blinders on at times but not much. Amanda: KISS YOUR DAD SQUARE ON THE LIPS!

Ellen: I just finished How Rory Thorne Destroyed the Multiverse and it was delightful and I might be in love with the Vizier. Now I’m reading Promise of Darkness by Bec McMaster ( A | BN | K | AB )–I’m very early in but I’m enjoying it. Also, so far the comparison to Court of Thorns and Roses seems quite apt.

Susan: Like Sneezy and Tara, I’m having a hard time focusing on one thing at the moment, so I’m bouncing between an ARC of All Fired Up by Lori Foster and Magic For Liars by Sarah Gailey.

I nearly DNFed All Fired Up ( A | BN | K | G | AB | Scribd ) on the first page because it has the hero watching (and fantasising about) the heroine from somewhere she can’t see see him, while she’s stranded by car troubles, and the author clearly knows this is creepy behaviour because THE VILLAIN DOES IT TOO LATER IN THE BOOK! But it’s compelling, so I’m still reading it and just being grumpy about it.

Magic For Liars ( A | BN | K | G | AB ) on the other hand is REALLY GOOD so far – I love Ivy as a protagonist, because she’s a Disaster PI and the kind of unreliable narrator where I don’t doubt her explanation of the facts, but her account of her emotions is definitely a lie. I’m just having to take it slow because I KNOW it’s all about to go wrong and I’m not ready!

Charlotte: I’m reading an ARC of The Rebel Bride by Shannon McNear. ( A | BN | K | G | AB ) It’s a Civil War inspie. That’s definitely pretty far outside my usual reading comfort zone, in both respects. I’m only about 10% into it, but it’s so unflinching in depicting the extreme trauma associated with living in a war zone and losing family that it’s hard for me to be in my romance-reading mindset. I have a lot of inherent skepticism around this type of plot (Union hero, Confederate heroine), but the introduction suggested the author is aware of the potential to go very wrong here, so I’m giving it a shot.

What were your hits and misses of the month? Let us know below!

By request, since we can’t link to every book you mention in the comments, here are bookstore links that help support the site with your purchases. If you use them, we greatly appreciate it, and if you’d prefer not to, no worries. Thanks for being a part of SBTB and hopefully, you’ve found some great books to read!