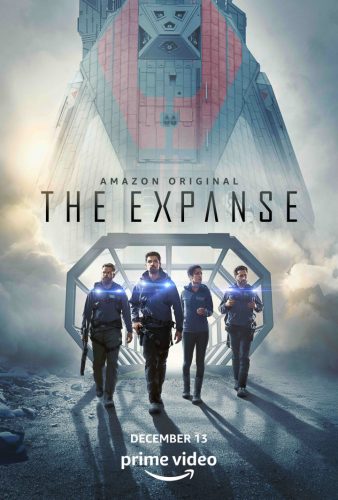 Welcome to a joint review of The Expanse Season Four. HeatherT is the person who first got me hooked on the show. Over the last few seasons we’ve had many differences over how we interpret characters and plots and which are our favorites but we remain united in our love of Amos and of Chrisjen Avarasala’s fashion choices.

If you are new to the Expanse, we suggest starting at the beginning. While we both found Season 1 to be a weak beginning, it sets so much in motion that if you don’t start there you’ll spend all your time saying “What’s Eros?” and wondering who the guy in the hat is. Newcomers will discover that the show has good science, interesting worldbuilding, great characters, a diverse cast (needs more queer characters though), and a mix of humor, action, space horror, hard sci-fi, and politics. If “found family” is your thing then look no further. The Expanse is not about romance, but it is about relationships, and watching those relationships develop over the course of four seasons is unbelievably rewarding.

It’s a tribute to the show’s complexity that we pick up new things every time we watch it. Also, subtitles are your friend, especially since many of the characters speak a patois.

To set the stage – The Expanse is set in a future where Earth is governed by the UN, Mars has been colonized, and the asteroid belt is populated by Belters — miners who are oppressed by both Earth and Mars. The story follows a series of different characters – First, the crew of the Rocinante – Jim Holden, Naomi Nagata, Alex Kamal and Amos Burton as they fly around the solar system causing trouble (and trying to fix it) wherever they go. Second, Chrisjen Avasarala, a foul-mouthed UN politician. Third, Bobbie Draper, a dedicated Martian marine. And finally, Drummer and Ashford, two Belter captains.

Here’s a spoiler-free look at Season 4!

Let’s cut to the chase: all the fans love Amos, and apparently the showrunners know it, because he gets quite an arc this season that should make all the Amos watchers happy. He doesn’t wear a shirt for several scenes (yay!), he interacts in a protective and kind manner with some characters but he also gets to be both passive aggressive and aggressive-aggressive; he gets some great lines; he reveals more about his backstory, and he has scenes in which he is emotionally vulnerable. The fan fic practically writes itself, but don’t worry – he hasn’t gone soft. He’s still a dangerous killer who will stop at nothing to protect his found family of Holden, Naomi and Alex.

Also of great import – we look into Avarasala’s closet. This is part of a sequence in which we see her get up and get dressed for the day. It’s a great sequence that, in addition to the thrill of looking in her closet, reveals much about her character and exactly why she wears those clothes without using any words. Well done.

Amazon has upped the budget and it shows. For the first time we have scenes on an alien planet and inside the living and working quarters on Mars.

CS: On a more disappointing note, while The Expanse continues its tendency to feature many diverse women with a variety of skill sets, this is the season of bad decisions and an awful lot of them are made by female characters. Despite now having better female representation than pretty much any other show I can think of, this show has always struggled with the fact that men make most of the driving decisions behind the plot. In this season, everyone makes terrible choices ranging from “they don’t have good options so ok” to pure WTF. I found it infuriating to watch women I know and respect do stupid things even when stupid choices were driven by character-consistent motives.

HT: While I agree with the poor choices comment, what bugged me more was that I didn’t follow the motivations behind the main villain’s actions, and more importantly, I didn’t get (and still don’t get) why someone didn’t just kill him by the end of Episode 3. He was unrelentingly evil – yes, he was aggrieved, but the way he dealt with it was so over the top – I found it distracting and off-putting especially when there was so much nuance and complexity from the other characters and stories.

We both enjoy the fact that The Expanse is always tackling what TV Tropes calls The Sliding Scale of Idealism vs. Cynicism. The show usually comes out on the side of idealism, but without glossing over the complexity of hard choices and complicated characters. Sometimes idealists, most notably Holden, Naomi and Bobbie, cause terrible harm from a well-intentioned place. Sometimes cynical characters accomplish great good more or less by accident. Idealistic characters can be pushed into temporary cynicism and cynical characters can be pushed into temporary idealism. Very few characters are all one thing or another. That really came to the forefront this season as almost every character – even the most idealistic – had to compromise or take positions that they seemed almost surprised to find themselves taking.

Despite the quibbles we both had, this season was complex and exciting, with our beloved characters getting plenty of time to shine. And we want to wear all of Avarasala’s clothes.