The Aeronauts may not be a very good movie, but it sure is a captivating one. I was cranky going into to the movie (for reasons I’ll explain later) and cranky after the fact. During the movie, however, I was charmed. There are few flaws that can’t be masked by beautiful photography and by the combined charisma of Eddie Redmayne and Felicity Jones, both of whom looked like they needed a hug at all times.

The Aeronauts, set in England in 1862, is about the efforts of James Glaisher, played by Eddie Redmayne, to break previous hot air balloon height records in order to study the skies. Glaisher was a real scientist, but this movie works best if you approach the character as entirely fictional (more on that below under “Historical Rant”). James believes that by studying the skies, scientists can learn to predict the weather, which would save lives. He’s nice to his parents, he’s a good friend, and he respects strong, intelligent women. Readers who follow my reviews will already have guessed that this character is so much my type that he might as well have “Carrie Bait” stamped across his forehead.

James cannot find a man who will be a pilot for his venture so he hires Amelia Wren, played with the most amazing courage and vulnerability by Felicity Jones. Amelia is an entertainer who flew with her husband before his death in a balloon crash. Initially Amelia and James clash because he thinks her entertainer persona will jeopardize his scientific respectability. Happily, that pretty much ends once she points out that the only reason he has a balloon is because the crowds she entertains pay for it. Once they get that over with, they can get on with the meat of the movie, which involves a lot of teamwork and mutual respect and fantastic chemistry between the two leads, who previously starred together in The Theory of Everything.

Given that this movie is pretty much made specifically for me (Feminism! Victorian Science!) you’d think I’d like it better, but although I liked many of its parts, it’s weak as a whole narrative. The flashbacks are unnecessary. These actors are capable of conveying their emotional journeys through their eyes but alas the movie spells everything out for the audience lest we miss such subtle themes as “You can’t just fly away from your problems!”

If you don’t want historical context, STOP HERE. The less history you know the more you will enjoy the movie. So READ NO FURTHER unless you want to be exposed to my HISTORICAL RANT. THE RANT COMMENCES NOW.

The movie is loosely inspired by the real James Glaisher, specifically on a flight he took with Henry Tracy Coxwell. By replacing Coxwell with the fictional Amelia, Coxwell’s contributions are effectively erased. Meanwhile, by suggesting romantic chemistry between Amelia and the very single James, the real James Glashier’s wife (Cecilia Gaisher) is also erased, which is a damn shame since she was an artist and scientist as well. At one point in the movie James’ friend tries to convince Amelia to pilot the balloon for James by giving her a copy of a book about snowflakes written and illustrated by James. In real life, the book was illustrated by Cecilia Glaisher, whose existence is not even hinted at in the film. 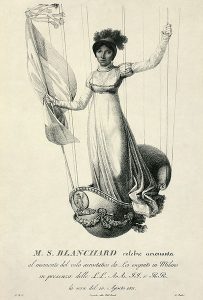 I don’t ask for detailed accuracy in historical fiction, and I’m very much in favor of more representation of women in adventure and in STEM fields. However, in order for Amelia to exist, the lives of one man and two women have to be erased completely. If James were presented as entirely fictional, than this could have worked as a story loosely based on composite characters. However, as soon as you give him the name of a real person, you have a responsibility to that person. If you want to make a movie about James Glaisher, by all means do so, and if you want to make a movie about Sophie Blanchard, by all means do that and I will personally buy all the tickets. But don’t create a composite female character who erases the contributions of real people, two of whom were women. That’s not feminist. It’s sloppy.

I complained about the historical problems with this movie all the way to the theater and all the way home. And yet, I cannot deny that while the movie was actually playing I was entirely within its spell. The scope, the cinematography and music, the chemistry and likeability of the leads, the adventure – it all reminded me of why I used to go to movies in the theater in the first place. The movie currently on Amazon Prime. This really is a fun movie to see, if you can handle the rant fuel.