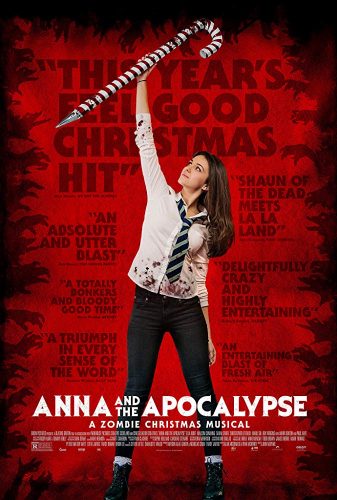 Anna and the Apocalypse

After the second song of the musical Anna and the Apocalypse, my teen viewing consultant looked at me with puzzled eyes. “Mom,” she said slowly, “This is…good!” And it is. While I spent my entire first watch of this movie trying to figure out what it was, I watched it again the next day and found it weirdly affecting for a zombie musical set during Christmas in the fictional town of Little Haven, Scotland.

The story, a mix of zombie movie tropes and musical tropes and high school tropes, concerns various teens, including our heroine (Anna), her best friend John who is madly in love with her, and their friends Chris and Lisa, who are madly in love with each other. “Withdraw your tongues!” snaps Headmaster Savage at Chris and Lisa, who exchange what may be cinema’s longest single kiss.

We also have Nick, a ridiculously handsome guy who is, alas, a bully and who also has a thing for Anna. There’s Steph, a queer student from America who feels alienated by her parents and her peers. Anna’s dad, Tony, is one of the few adults. He and Anna are struggling with their relationship following the death of Anna’s mom.

The first part of the movie sets up all these relationships and conflicts, and by the time the zombies show up, we already care about the characters. It’s a funny movie, but also creepy and tragic and inspiring and sad. In one of the first songs, the characters warn, “There’s no such thing as a Hollywood Ending.” We can’t say they didn’t warn us.

While the movie pays homage to many musical and zombie genre tropes, some are avoided. Both Anna and Lisa have sexual relationships. The movie does not end in romance and there’s not much of a love triangle since Anna isn’t super interested in either John or Nick (she’s attracted to Nick, much to her disgust, but has no interest in being his girlfriend). In most horror movies, the heroine sheds clothing as the movie progresses, but Anna is never portrayed in a sexualized manner and in fact she adds clothes as the movie goes on. Of the six main teens, one is either bisexual or lesbian and two are actors of color. Even the zombies are somewhat humanized (they like tinsel), and while the group has no problem killing them in self-defence, they recoil at Nick’s policy of hunting down zombies that don’t pose any immediate threat.

In one of the more chilling moments, Lisa tries to get Savage to help her care for Chris’ grandmother, who has a heart condition. All three of them (Lisa, Savage, and Grandma) are trapped in the school. “I see civilization on the edge,” Savage sneers. “What do we do when civilization is on the edge?”

“We help each other” says Lisa, firmly.

“We prioritize,” answers Savage, the actor gleefully eating all the scenery he can get.

The music in Anna is not terribly inventive but it is hopelessly catchy with good harmony and a lot of use of counterpoint. Expect to have the music stuck in your head for a very long time. This is both annoying and proof that the songwriters did their job well. All the actors are wonderful singers as well as actors and if they do not become giant stars I will riot. There’s so much energy in the movie, and so much heart. Also so much gore – I have to mention that this is one of those movies that thinks over the top gore is hilarious (sometimes I agreed and sometimes not) so there’s blood spewing all over the place and heads flying around and of course the required “person is disemboweled alive” scene which all zombie movie fans will of course expect.

The movie pays tribute to a lot of other movies and sometimes that backfires. When Anna sings “What a time to be alive!” with her earbuds in, oblivious to the zombie horrors taking place behind her, it’s cute, but Shaun of the Dead did the same thing better. When Anna and Savage face off and Anna kills zombies while singing about why humanity is worth fighting for, it’s so close to a particular musical number from Buffy The Vampire Slayer that it’s distracting, especially since the Buffy song was so much better.

However, numbers like “Hollywood Ending” are exciting and clever and revealing and I found “I Will Believe,” sung in an understated fashion by the exhausted, grieving, but still fighting Anna, to be almost unbearably affecting. I’ve been struggling this year and looking for stories that insist that we should fight the good fight whether we will win or not. This song spoke right to my heart.

Anna and the Apocalypse is a love it or hate it movie that avoids a lot of the more toxic tropes of musical and zombie genres while reveling in others. Watching Anna kick ass with a large candy cane has certainly uplifted my holiday season. I just wish I had Anna’s fleece penguin onesie pajamas. Gory trailer ahead.