This week on The Bachelor, Peter, Hannah Ann, Madison, Natasha, Kelley, Kelsey and Victoria F travel to Peru. Peter has a lot of paring down to do because next week is hometowns, where the Bachelor meets the families of 4 of the remaining contestants (it’s also the episode with the most secondhand embarrassment).

Peter stops by the ladies’ hotel to tell them he’s serious about this season ending in marriage and asks them to be honest about why they are there.

In head wound news, the bandage is off the gash on his head and the stitches are out. Since he can’t operate a golf cart and a glass at the same time, I wouldn’t be surprised if he reopens it somehow.

Like a six-year-old, Peter points out to Madison that he took the Band-Aid off his ouchie and she tells him his scar looks like he got into a fight with a tiger.

They go fishing, eat ceviche, and drink on a boat.

Then they make out and there is a disturbing amount of tongue. 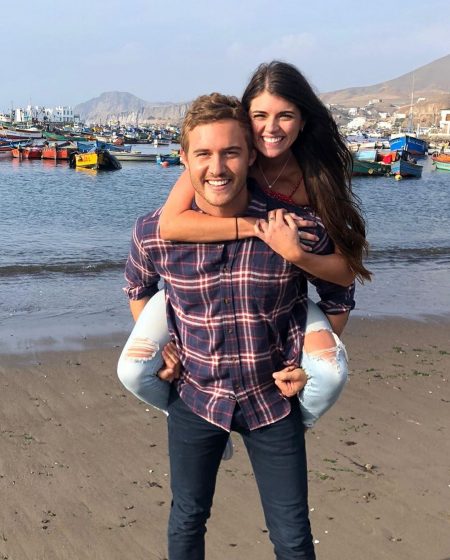 During the dinner they aren’t allowed to eat, Madison tells Peter that her religion is very important to her, and talks about her father’s role in her life and his relationship “with the Lord.”

She wants her husband to be a faith leader in the family and community. She asks Peter if he can make that pledge to her.

He admits that his faith could be stronger but says it’s important to him.

So then Peter tells her he’s falling in love with her.

He gives her the date rose and they make out.

Not to TMI, but at this exact moment I start having menstrual cramps and I’m 100% sure it’s not coincidental.

After the commercial break we get Natasha’s one-on-one date. The walk around the Plaza de Armas in Lima. They eat desserts and then Peter joins in on some traditional dancing and…it’s not good.

Natasha tells Peter she hasn’t brought a guy home in four years, and that her last boyfriend broke up with her for being “too intense.” She says that’s why she appreciates the honesty of The Bachelor process.

At dinner Peter asks Natasha if she really sees them working out and she says they have a strong connection. She asks him how their lives would work if they wind up together (presumably meaning a long distance relationship) and he says he’s just focused on finding the right person right now.

Then he tells the camera that he looks at Natasha as a friend, not as a partner.

“Natasha, I owe you all the honesty that I have,” he tells her. “And with the relationships that I have, and the point that I’m at with you, I can’t give you this rose.” 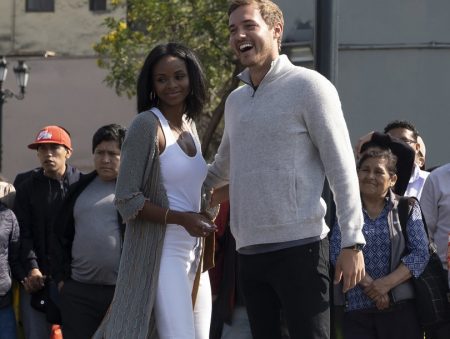 “I hope you follow your heart and find what you’re really looking for,” she replies. “I know I will.”

As they walk out, a string orchestra plays outside. It’s weird because we haven’t seen them yet so there’s just been a bunch of musicians sitting there playing while Peter broke up with Natasha? Or did they have to sit silently and listen and then play dramatic music when he walked her out? Were they watching the whole conversation? Is one of them another of Victoria F’s exes?

The last one-on-one of the show goes to Kelsey. They ride 4-wheelers in the countryside. “We are riding in the mountains, pretty much in the clouds,” Peter says. “This is unreal.”

Isn’t he a pilot? Wouldn’t he see clouds a lot? I really need to know what airline he flies for.

They picnic and Peter straight up naps in the grass while Kelsey tells him about how she wants to have a family.

At dinner Kelsey tells him that if he meets her family, her mom will be there, but she’s been estranged from her dad for ten years. They tried to reconnect after she won Miss Iowa, but she hasn’t told her mom that she’s speaking to him.

Peter says that he thinks it’s beautiful that she’s giving her dad a second chance.

Now, just to remind you, Kelsey said that her dad left the family by leaving a note on the counter (for her to find) because “God told him to.” I respect whatever choice she makes for herself, but you don’t have to forgive someone who hurt you badly. Forgiveness is not healing.

Off my soapbox now.

Since she unpacked her trauma for him, Peter gives her the date rose.

The last date is a three-on-one with Peter, Hannah Ann, Victoria F and Kelley.

They spend the day at a 250 year old hacienda. Peter points out that his Band-Aid is off again. Peter asks to talk to Hannah Ann, and Kelley, who revealed last week that she is here for the wine and travel (I KNEW IT) lies down for a nap.

Meanwhile Hannah Ann cries and tells Peter she’s afraid this is the last time she’ll see him. She made a list of reasons why she’s falling for him and reads it to him. I shit you not, she dots her i’s with a heart. Also one of the reasons is “you are you.”

Victoria F tells the cameras she’s already in a bad mood and says, “It’s annoying to be around me!” which is some self-awareness, I guess.

Kelly snoozes through the meltdowns. She thinks that Peter will appreciate that she’s more mature than the other girls and doesn’t start drama. She tells Peter, “Not every relationship has to be jumping through hurdles and super hard. It can be easy and fun.”

Peter, who rewards drama, looks at her intently scrunching his forehead despite his ouchie.

This is The Bachelor, Kelley. None of these relationships are supposed to be easy or fun.

“Again, you’re right,” he admits sadly. “Is it more than just fun for you?”

Peter says he hates the word fun because he wants things to be serious.

I guess serious is when you sob in a bathroom stall while also sneak-eating Cheetos. I’m not a relationship expert (outside of romance novels, I guess) but Kelley is way more mature and grounded than any of the other people here. Her refusal to perform her trauma or break down in tears over nothing in front of Peter is clearly not working for him, probably because it’s either not feeding his ego or it’s not part of the show’s ‘script.’

Honestly if there’s anyone there a relationship might work out with, it’s Kelley. She clearly has a sense of humor and also a sense that a lot of this is TV bullshit that she refuses to engage in. She’s taking everything with a grain of salt.

Later Peter talks to Victoria F and says he’s confused about their relationship because their last one-on-one date wasn’t awesome.

“It’s like every time we’re together I feel like you’re  always in a mood and it’s extremely frustrating because [lots of mumbling here] I don’t know how to move forward if this keeps happening. I don’t get it,” Victoria F says.

I did rewind to confirm she said “a mood” and not “the mood.”

Peter tells her he feels like she’s attacking him. “I feel like you’ve given me reasons to doubt,” he replies. “I’m not in a mood.”

She starts to cry and says, “At the end of the day I don’t want to get to the end and lose you, so it’s easier to not have you in the first place.”

Peter walks Victoria F to a waiting SUV. He says, “Victoria, I appreciate what we have and I know it’s not always super easy between the two of us.” He tells her he appreciates her honesty today and that he wants to continue things with her. He gives her the rose. She’s shocked.

Back at the drinking couch, Kelley and Hannah Ann think Victoria F just got sent home.

Peter sits down between them and tells Hannah Ann he appreciates her sweet nature and honesty. Then he tells Kelley how excited he’s been about their relationship. He gives the rose to Hannah Ann.

Hannah Ann, despite getting the rose, breaks down sobbing.

Kelley says it sucks that it didn’t work out, but doesn’t get emotional. Peter says he felt like Kelley was more of a friend.

Kelley tells the camera that the four women who are left “are like little babies and don’t know who they are yet.” She adds that she’s glad he didn’t waste her time. “Thank you for not meeting my family,” she says.

And that’s where we end.

Do you agree with Kelley’s assessment of the other women? Are you watching?